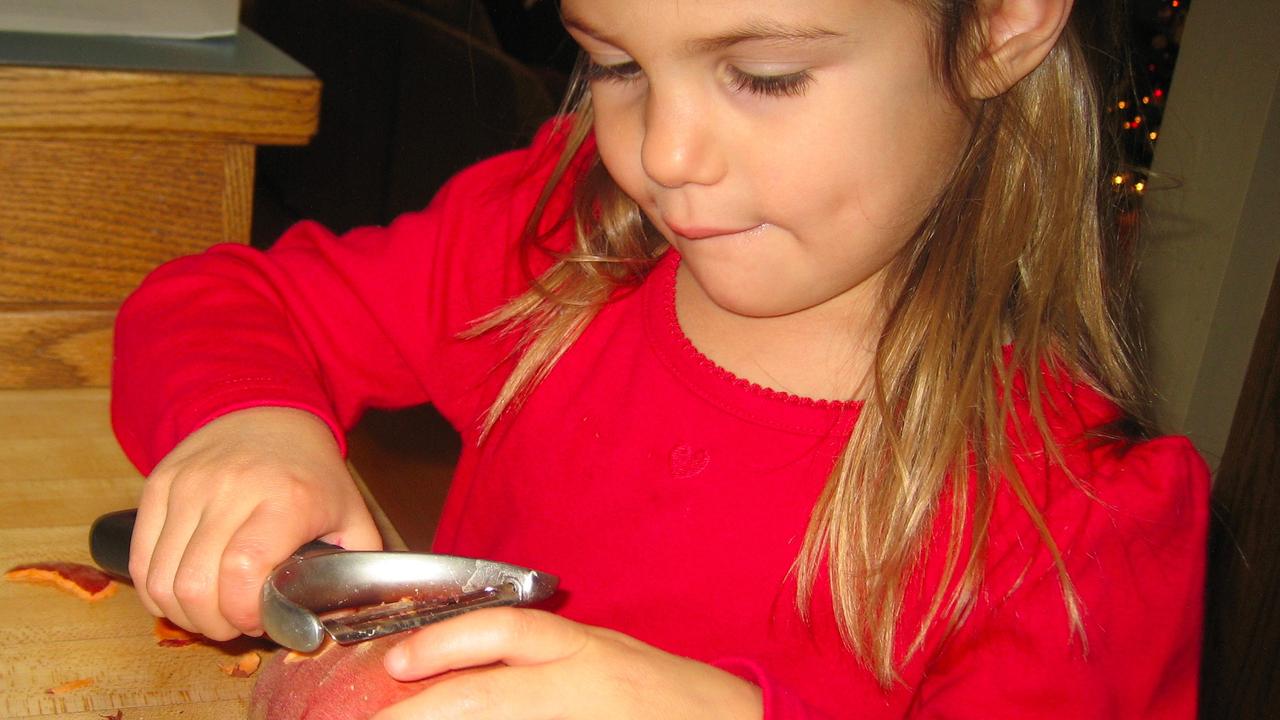 In the story of Hanukkah, the Jewish Festival of Lights, during the re-dedication of the Holy Temple in Jerusalem in the 2nd century BCE, consecrated olive oil that was enough to last for only one night, miraculously burned for eight nights. Hence the tradition of celebrating by lighting Hanukkah candles for eight nights and eating foods fried in oil like doughnuts and potato latkes.

Several years ago, we first tried Robin Robertson’s vegan potato latkes and LOVED them! Over the years, my husband, David (the latke maker of our house), and I have put our own touches on her fabulous recipe.

Directions
1. Wash and shred potatoes. Next, in a food processor fitted with the “s” blade, pulse 5-6 times to grind to a rough chop. Then, put potatoes in a strainer with a bowl underneath. Set aside to strain, and then squeeze out any excess moisture. Grate onion and mix together with strained potatoes with parsley, flours, baking powder, salt, and pepper.

2. Preheat oven to 275°F and prepare an open paper bag lined with paper towels for receiving the cooked latkes.

3. In a deep skillet over medium heat, add a thin layer of coconut oil to fry latkes. Using a 1/4 cup measuring cup, scoop the potato mixture and gently place into the hot oil. Flatten to about 1/2 inch thick. Fry for 3-5 minutes, or when the latkes have browned. Flip and fry the other side for 3-5 minutes to golden brown. Remove from oil and place on paper towels to absorb excess oil, and then transfer to the oven to keep warm until ready to serve. Repeat with remaining potato mixture, using additional frying oil as needed.

4. Serve with vegan sour cream or applesauce or enjoy them the way I prefer, naked. 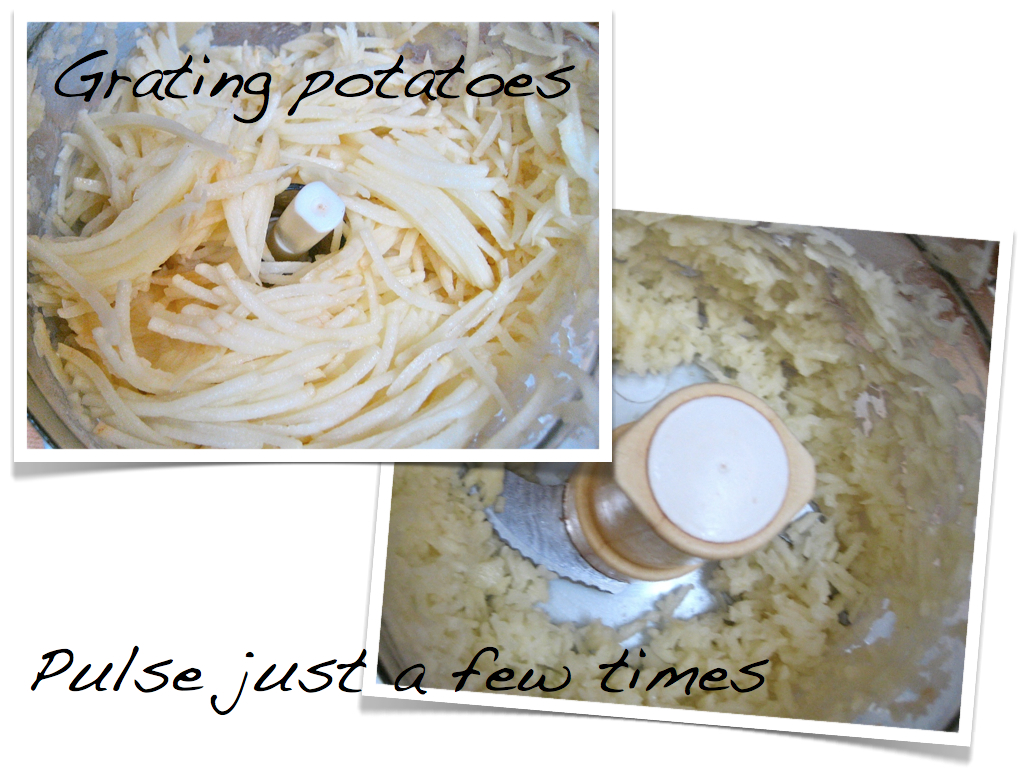 We pulse the shredded potatoes just a few times in a food processor to get a nice texture that’s in between hash browns and mashed potatoes. Since we’re sensitive to wheat, we use oat flour. 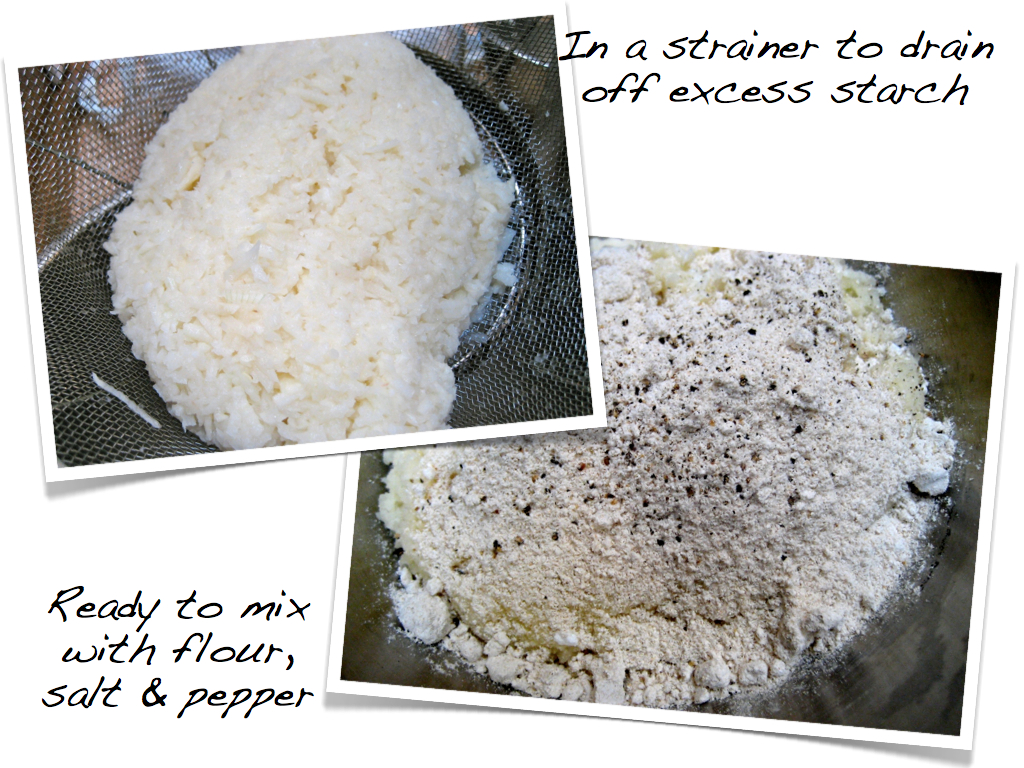 We like to be precise when it comes to cooking, and when I say “we,” I mean “I.” Anyhow, I find that an ice cream scoop or 1/4 cup measuring cup works perfectly to get the same sized latkes every time, which makes it easier to fry them evenly. About frying, as you can see from the photo, we’re not deep frying these babies–just using enough coconut oil to get them crispy and golden brown. I use unflavored coconut oil for all of my high-heat cooking since it can withstand the heat without converting to trans-fatty-acids or TFAs. 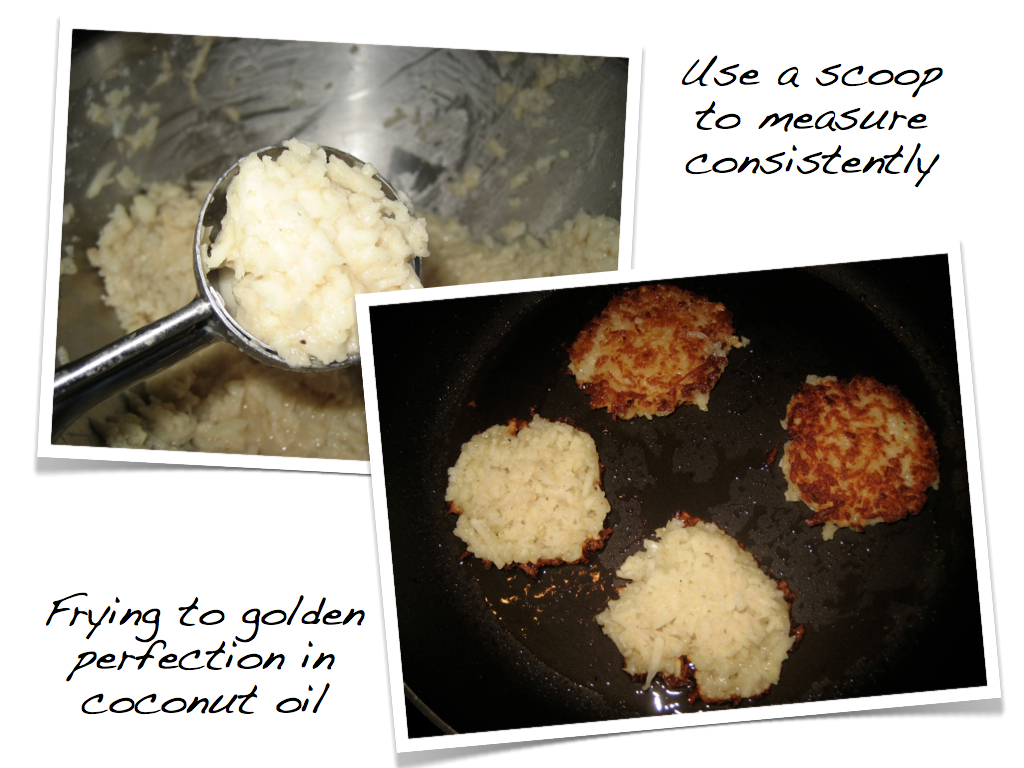 One year, David made some with yams. They were beautiful and tasted lovely, but needed extra binder since yams don’t have as much starch as russets. Maybe we’ll perfect that one some day; it’s great for people who are sensitive to nightshades or otherwise can’t eat white potatoes.