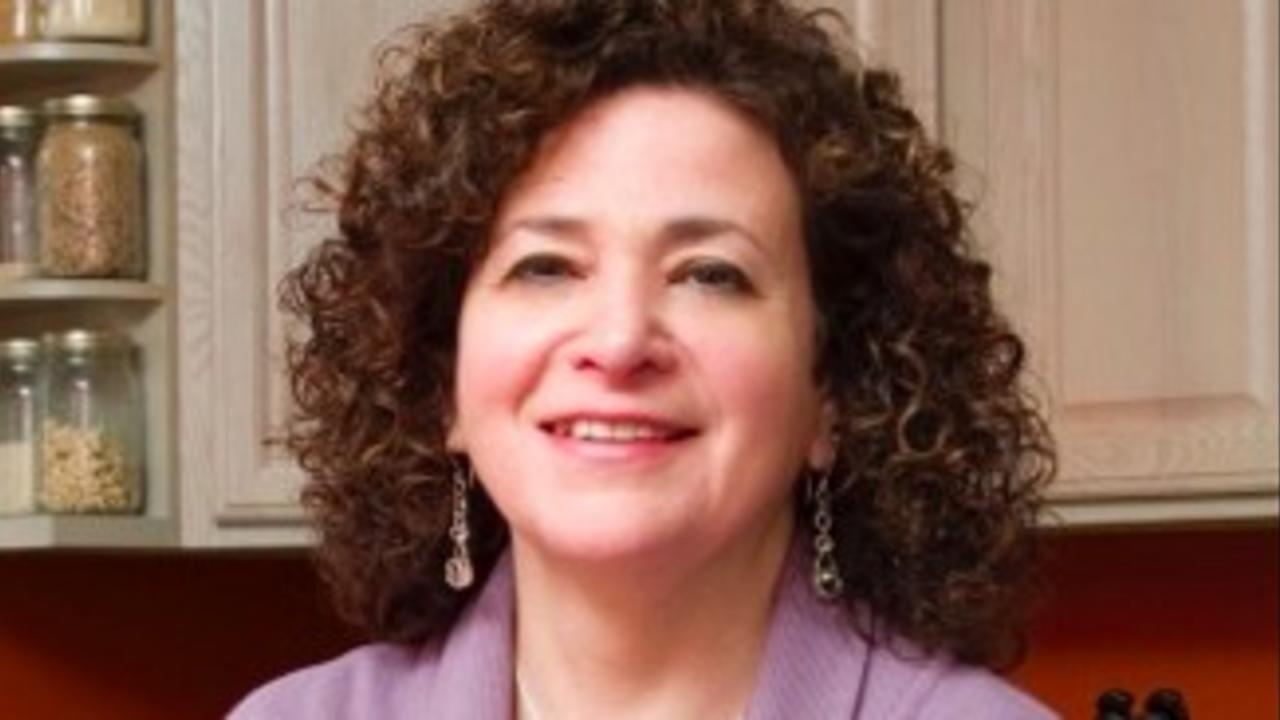 Author, artist, and chef Nava Atlas has produced an array of work that has been part of the foundation for modern vegan cooking. Her first book, Vegetariana, was published in 1984. She has gone on to create more cookbooks, visual books, articles, and works of art that display at museums across the country. We are so fortunate to have Nava her sharing some of her wisdom.

Allison Rivers Samson: You offer such a diversity of recipes on VegKitchen.com and in your cookbooks and e-books! When did you develop a love for cooking? Were you always a food connoisseur?

Nava Atlas: I developed a love for cooking as a means of survival. When I went vegetarian at age 16 or so, my mom said she wouldn’t cook two separate meals. So I learned to cook for myself, and instead of it putting an end to my rebellion, as she’d hoped, pretty soon everyone wanted to try what I was having. I can assure you, my meals were far from a pretty picture; we’re talking about the 70s, with the brown “oats and groats” cuisine. Over the years, my love for cooking grew, but I’ve always preferred simple and straightforward meals. I think people like my recipes because they’re easy and accessible. Truth be told, for a cook, I’m pretty lazy.

ARS: Sometimes simplicity is a refreshing alternative. You started out as a vegetarian cookbook author and moved right into vegan cookbooks. What was involved in that process for you and how did you transition?

NA: I transitioned to vegan cookbooks concurrently with going vegan myself. Actually, my entire family (husband and two kids) went vegan at the same time. We had raised our kids vegetarian from the start (veganism was just coming up on the horizon when they were little). Once the internet age hit, there was more readily available info about food and nutrition, and I started to learn unsavory things about the dairy industry.

Being a product of the cultural conditioning that has allowed the dairy industry to exist, I worried about cutting dairy out of my kids’ diets. So we took a little field trip to a sweet little local dairy farm, thinking maybe I’d feel better if we used their products. But no matter how local or organic or humane a dairy farm claims to be, there are things that are hard to ignore. When I saw with my own eyes the little calves in crates, some about to become veal, I knew I couldn’t be part of that cycle any longer. My son Evan was 10 at the time and was the first to announce his decision! I was very proud of him for that. We all followed suit very shortly. 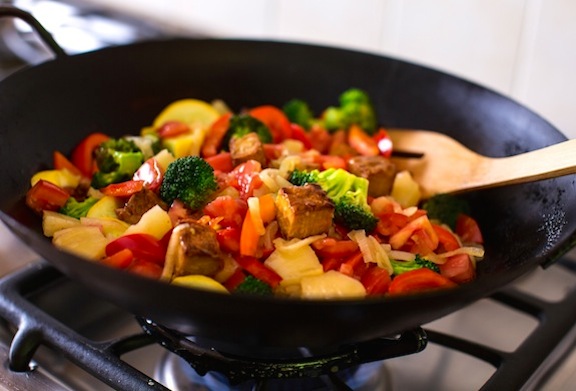 ARS: How wonderful that you supported your son in leading your family toward compassion! What are some of the earliest vegan recipes you ever made? Did you have a few simple staples at that time (or any you could recommend to new vegans)?

NA: The earliest vegan recipes I made were likely things that would appeal to my kids. We’d always enjoyed plant-based fare, since even as vegetarians it wasn’t like we were constantly using dairy and eggs. I’ve always been very big on veggies, and they, along with fruits, were always on the table.

What I always recommend to new vegans or the veg-curious is to start with dishes you already like, and discover ways to make healthy, plant-based versions. It’s easy to convert pizza into a vehicle for lots of veggies, and to give it the yum factor with non-dairy cheese. Likewise, tortilla specialties are easy to make in vegan versions — seitan fajitas, tacos with spicy quinoa filling, bean burritos. We made things like that, and so it wasn’t a huge stretch to go from veg to vegan. We’ve also always been big fans of Asian-style fare — stir-fries, tofu dishes, and the like, as well as soups and stews. I try to dispel the notion that going vegan means you’re going on an exotic and expensive culinary journey. It can start with fare you’re already comfortable with, but made much better!

ARS: Indeed. The advice for veg kids and teens on VegKitchen.com is very beneficial and much-needed by vegan parents. Any tips or advice you can bestow about inspiring kids and teens to eat more healthy, plant-based foods? 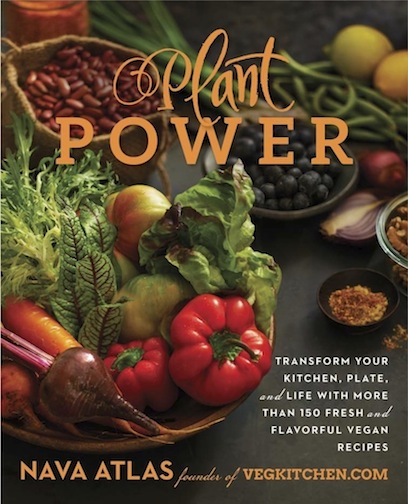 NA: I invite parents as well as kids and teens themselves to explore the Veg Kids and Teens page on VegKitchen for all kinds of tips and simple recipes. I’ve gotten lots of e-mail from kids and teens over the years who want to go vegetarian or vegan. While there are plenty of parents out there who want their kids to eat healthier, there are also lots of kids and teens who no longer want to eat animals. I tend to hear more from the latter.

In my new book, Plant Power, I have a brief section called Getting Kids on Board at the Plant-Powered Table. My main piece of advice is to give kids choices, and teach them how to make good decisions. It’s really important to give kids a bit of the power — let them help plan one meal a week, and when they’re older, to make one meal a week. Take them to farm markets; introduce them to healthier snacks from the natural foods store. Let them help cook meals. The message should be that family meals are for comfort and fun, and shouldn’t be a stressful chore.

ARS: Food empowerment is critical for us all. You have a fun e-book featuring 35 different tofu recipes. What's your favorite way to cook and prepare tofu?

NA: That’s a tough one! I like tofu in so many ways. But if I had to choose a favorite, it would probably be my “tofuna”salad. I’ve been making it at least every other week in some way or another for ages. My current favorite way is to finely crumble a package of baked tofu, then add diced celery, vegan mayo, nutritional yeast, and sometimes some hemp seeds. It’s almost mindlessly easy. When I make it for guests, even those who think they don’t like tofu, it’s practically inhaled.

ARS: It always surprises me when people say they don’t like tofu. What’s not to like? I remind them that it’s a canvas and one wouldn’t eat plain tofu any more than hang a blank canvas on a wall! What changes have you seen happen in the food industry since the debut of your first book in 1984?

NA: That’s a good question, and a very big one! The biggest change is the availability of such a wide array of foods, and all the new products. Thirty years ago I’m not sure there were any non-dairy cheeses, let alone artisanal varieties or meltable ones. Even the range of fruits and vegetables has broadened, and seasonality has stretched. If one has the means and access, it’s so much easier to eat better and healthier.

On the other hand, factory farming and food insecurity have ballooned. It’s heartbreaking that so many people, even in a country like the U.S., suffer from food insecurity. And it’s also perplexing that with better food available even in less populated areas, that Americans aren’t getting healthier. I think part of the problem is that an insane amount of grain and other plant foods are being grown to feed cattle, not to mention all the effort and energy required to process and transport animals once they’re converted into meat. 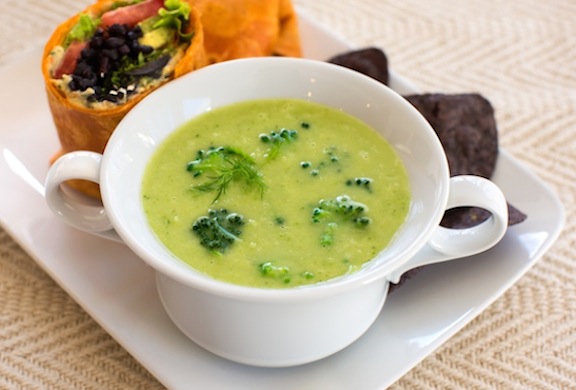 ARS: Agreed. And let’s not forget about the corporations and marketing push of junk “food.” What do you wish more people knew about cooking or vegan eating?

NA: I wish people knew how much animal agriculture contributes to greenhouse gases, and how that in turn affects climate change. And that in this turbulent world of ours, we can all make at least a bit of difference every day by refusing to participate in the cycle that exploits animals. It’s not only inherently violent, but an unmitigated environmental disaster.

On a lighter note, I wish more people could experience the joy of cruelty-free food, and to understand that vegan food is, at the core, simply food — the kind of food nature intends for human consumption. Grains, beans, nuts, seeds, fruits, vegetables — what’s more elemental than that?

ARS: So true! Any new projects or books on the horizon you're able to share with our readers?

NA: Oh, yes — the aforementioned Plant Power: Transform Your Kitchen, Plate, and Life with more than 150 Fresh and Flavorful Vegan Recipes, which is hot off the press (HarperOne, Sept. 2014). I’d like to give a shout-out to the talented Hannah Kaminsky, whose photos brought the recipes and menus to life.

I lead a double (or maybe triple) life, as some of my readers know, as a nonfiction writer and visual artist. My work deals with social justice and women’s issues, and lately, animal welfare themes are emerging. I’ll be participating in an exhibit honoring Carol J. Adams’The Sexual Politics of Meat, opening in May 2015 at the National Museum of Animals and Society in L.A. with a new installation. I’m also still very involved with building VegKitchen and its companion Facebook page; as well as dozens of other things — to list them all would be TMI!

ARS: I love Hannah’s work too! And I hear you on the dozens of projects. Which do you prefer savory or sweet?

NA: I hate to say this to a baker, but I’m much more inclined to the savory side. Given a choice of something sweet as a snack or something like popcorn or olives, I must admit I’d choose the latter. But I’m not opposed to an occasional sweet treat, especially if it’s chocolate.

No shame in that! Thank you so much for talking with me, Nava, I can’t wait to see your new book, Plant Power: Transform Your Kitchen, Plate, and Life with more than 150 Fresh and Flavorful Vegan Recipes.