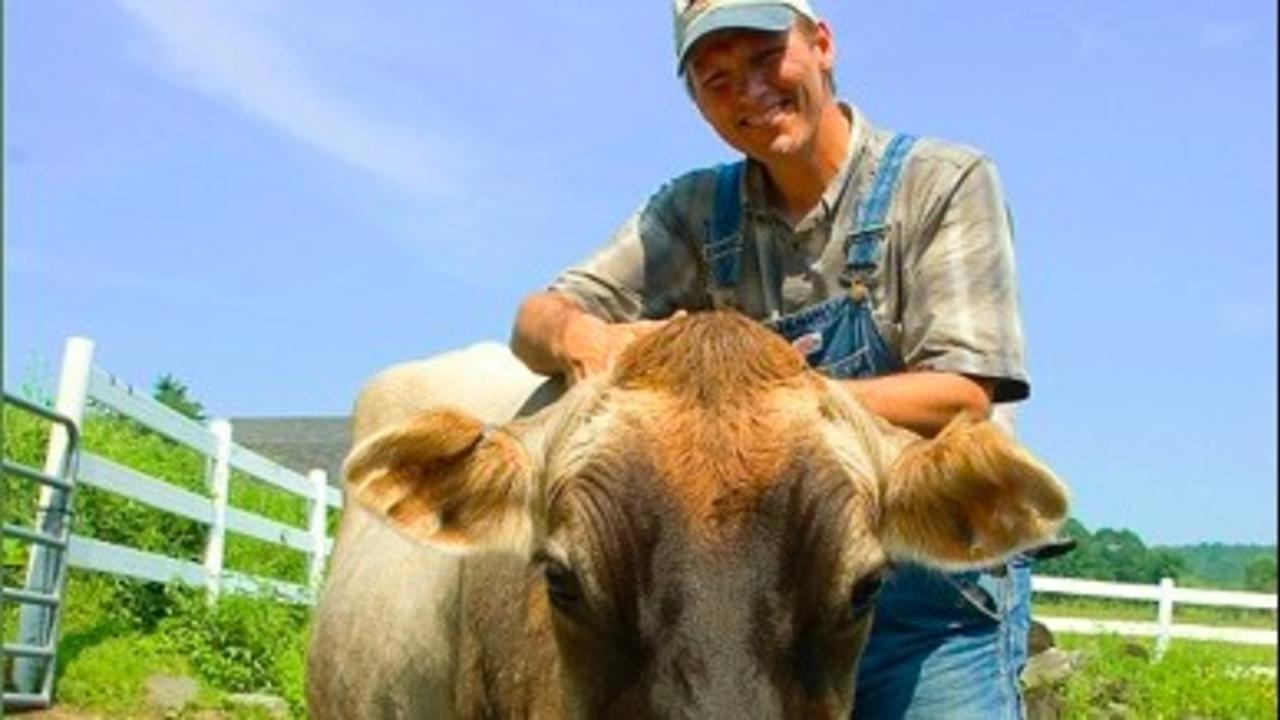 If given the chance to share dinner and conversation with a leader from the animal rights movement, Harold Brown would be a compelling choice. Having grown up on a farm himself, Harold now helps farmers whose livelihood relies on animal agriculture  to transition to compassionate, plant-based farming. It's a worthy mission and Harold has the history to achieve just that. Read on to learn about Harold's own move from cattle farmer to vegan animal advocate!

Allison Rivers Samson: You come from a unique background having grown up on a cattle farm in Michigan and later working in the dairy industry. What was that experience like for you?

Harold Brown: In hindsight it was pretty good. Nature, fresh air, and hard work are what I love and living on a farm provides all of them. Of course there were down sides like doing castrations, dehorning, moving animals, transporting them, killing wildlife because we felt they were competition, and killing the farm animals. While I lived that life, it all seemed normal even though I felt, as a young child, that some of this was not right. Yet, I accepted it mainly because I didn’t have any other models.

ARS: How did you get from there (working in the animal industry) to here (being a vegan and active animal advocate)?

HB: The first wake up call was having a heart attack at 18 years old. At the time I didn’t know I was having one because I didn’t know what the symptoms were and when the pain passed, I felt fine. I think when you are a teenager you feel bulletproof and shake things off pretty easily. Not that that is a good idea!

I was indoctrinated into that relationship with animals from the get go. Everything supported what my family taught me, i.e. the community, church, 4-H, and later a land-grant college. But most of all it was commercials on TV. At every commercial break there is at least one ad selling animal products, and sometimes those products can stuff all of the farm products into one sandwich (think egg, sausage, bacon breakfast sandwiches). This was validation. We were feeding a hungry world.

When I was working for a dairy plant, I was injured, and the doctor said my blood work was out of whack. He told me that if I didn’t make a few changes I would probably have another heart attack or bypass by the time I was 35. I asked him what I should do, and he said to cut out saturated animal fats and sugar. My problem was high triglycerides. I had to give up red meat and ice cream. Ice cream is the bomb for triglycerides. Giving up red meat really stressed my relationship with my family even though they knew I was doing it for my health. By this time my father had had a bypass and a stroke. I didn’t want to go down that road!  The next year was stressful, and we packed up and moved to Cleveland, OH. It was there that I met a wonderful group of people who had a vegetarian group but were more than that. They were part of John Denver’s Windstar Foundation and John Robbins was a big influence on Denver and those associated with him. They also facilitated a program called Attitudinal Healing, which was founded by Jerry Jampolsky. It was through this work that I started to unpack my emotional baggage. Not easy. It was this point that I realized that I was dealing with PTSD. The tag line for the Windstar Foundation is “Making responsible choices for the future”. This is also a core principle of Attitudinal Healing. Simply put I had some choices to make. This was the beginning. For the first few years I made changes to a plant based diet to reverse my heart disease. My animal consciousness didn’t come till later. That is when I became a vegan. 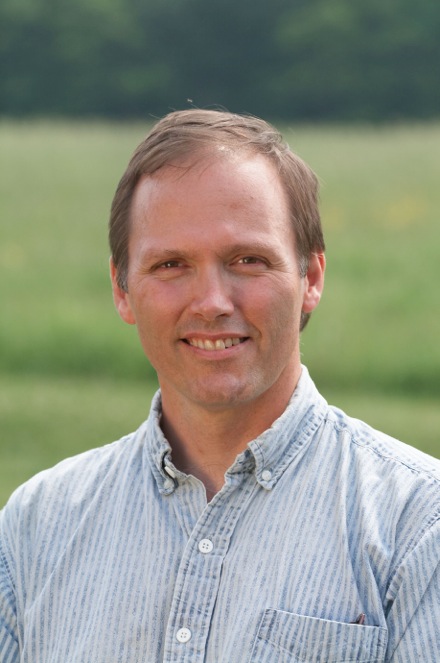 ARS: I've never heard of anyone having a heart attach at age 19. Wow! I appreciate that you dove into the emotional realm. It's a very big missing piece that is so important to explore and process. You've talked about how prior to going vegetarian it was like you had a "compassion switch" that turned on for some animals like dogs and cats but off for farmed animals. That's a good way to describe the relationship most people have with animals. Fortunately, you learned to have compassion for all animals. How can we get others to make this connection?

HB: To actively listen and be a student of human nature. As a species, we are pretty messed up because of our psychology and emotions. Attach to that our traditions and being the product of 8,000+ years of herding culture, and we are so embedded in our irrational relationship with the natural world we can scarcely see beyond the end of our noses. I see my role as a mentor and nurturer. Sure, I have lots of information to share with folks, but I have found that if I listen to what people really need I can be present for that. This is our work. To simply hand out information and hope against hope that that person will make a transformative change hasn’t been very effective. I need to be an example that others are drawn to. We each have talents and abilities that we can use that others will be drawn to. Like your yummy goodies, Allison! That is your strong suit.

One of mine is being open and honest. An example I can share is of a woman who raises Angus cattle for the “natural”, “grass fed” market. I have known her for a number of years but about three years ago she confided in me that she was uneasy about the process of raising calves to send them to slaughter. This past spring, during calving season she said that she felt that she couldn’t continue to “murder” these beings. That was the word she used, murder. I have never judged her or proselytized to her. She knew my background and where I am coming from now. By respecting her journey and being present for her, she may have felt that my example provided another way, perhaps permission to be different in the world. I know that being a guy, it works like this. Men are not taught or encouraged to be emotionally honest, and I think I provide an example for them and maybe permission to be something different. It is hard work to be sure but so rewarding. All change happens one person at a time, and we are involved with the biggest social justice movement ever undertaken by humankind. And that is exactly what it requires from us, kindness.

ARS: You are so right. When we first met, I was instantly drawn to your kindness and gentle strength. I imagine many people feel that from you. Sometimes, I get so excited when people want to make changes that the most challenging part for me is to be still, be quiet, and simply listen. Thank you for that reminder. Another way you work to raise this consciousness toward animals is through a nonprofit you created called Farm Kind. Tell us a little more about Farm Kind.

HB: Farm Kind is about helping farmers to transition from animal farming to plant-based farming. It is also about promoting an ethic of compassion, respect, and love for all beings and the planet. Farm Kind, (this is weird, it is like I’m speaking in the third person), is also engaged in sustainable agriculture, farm worker rights, social justice, environmental justice, and peace through non-violence.

ARS: People are often surprised that non-human animals have an emotional world. In your experience on farms, what are some of the emotions or intellect that you witnessed in animals?

HB: Oh boy, there are so many examples throughout my life. One example is in the spring when cows have had their calves. I have watched a whole group of calves hanging out together with three or four cows around them grazing. Where are the other mothers? They are off grazing so they can make more milk for their babies. What I came to understand is that those few cows that stayed with the calves were babysitters. A herd has a social structure, a matriarchal one where they take care of each other, find the best grasses and water together, protect one another, and in some cases grieve for a herd member.

When I lived on the farm, I witnessed grieving. During deer hunting season there were hunters who became frustrated with not having a target to shoot at so they would use one of our cows as a target. I always knew when something was wrong because they wouldn’t return to the barn in the late afternoon, and I could hear them lowing somewhere out back. When I investigated I would find them surrounding the body of their herd mate lowing. It sounded like a low crying. They would stay nearby until we buried the body. It was heart wrenching.

Thank you so much for chatting with me, Howard.