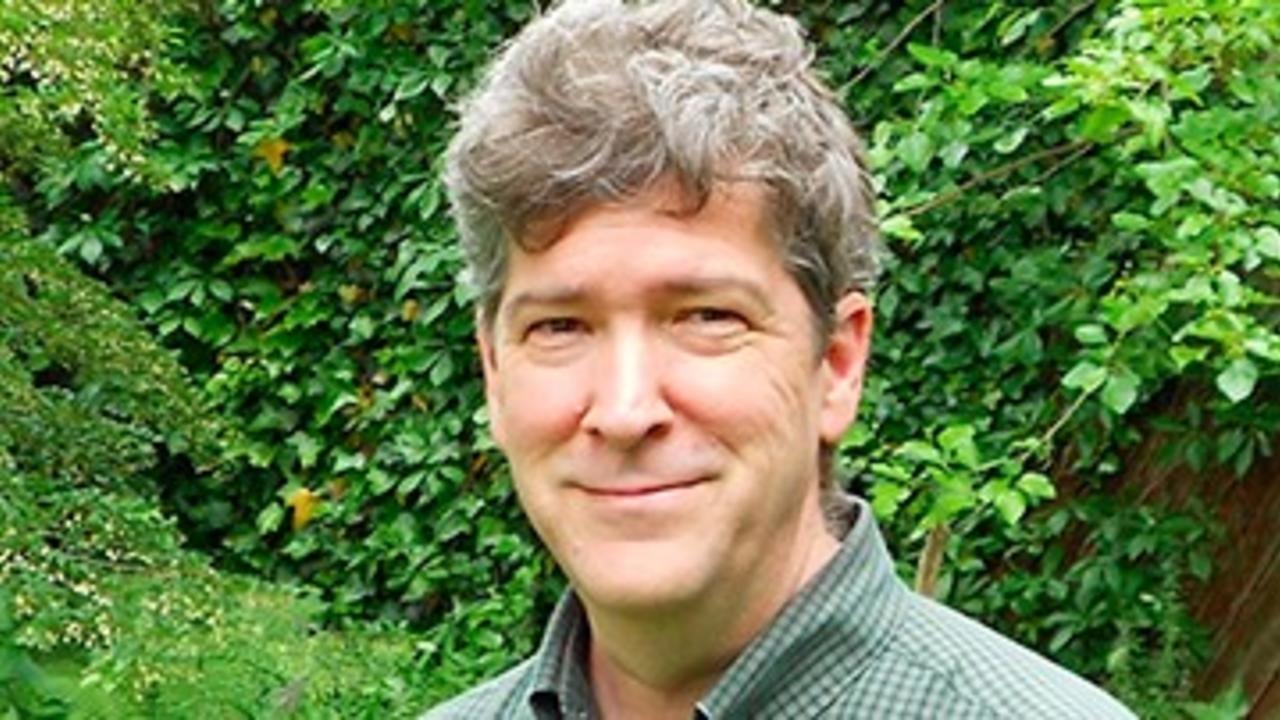 You might have noticed that vegan topics have moved into the headlines of one of the country's largest newspapers: The Philadelphia Daily News! This development was the result of a long journey by journalist Vance Lehmkuhl, who has been writing about vegan food topics in Philadelphia for over 10 years. Vance sees firsthand the role that media plays in furthering animal rights causes.

Allison Rivers Samson: You've been a significant media champion for animals for many years! How did you convince one of the country's largest papers to include a veg column?

Vance Lehmkuhl: I'd been writing vegan-oriented articles for the Philadelphia Daily News since 2001, covering vegan developments in town for the paper's food section (and also, for a while, more hard-hitting vegan op-eds for the Opinion section). In 2006 I pitched and wrote a Features section cover story about a husband-and-wife team that was bringing their restaurant to Philadelphia proper from its former location in the far northern suburbs. I wrote that this was going to be a game-changer for vegan cuisine in Philadelphia, and it was - the restaurant was Horizons Cafe, which became simply Horizons in Philly, and which did indeed change the game, not just showing people that vegan food can be as delicious as nonvegan food, not just showing that entirely vegan restaurants can compete head-to-head with the best nonvegan restaurants (the team in question, Rich Landau and Kate Jacoby, went on to launch Vedge, which a Zagat survey recently named as the Best Food in any restaurant in Philadelphia), but also training workers who went on to start their own vegan establishments. Two effects of this were that now there was more of a vegan "scene" to cover, and my editors saw that I kind of knew what I was talking about, so I started pitching a column around 2009. It finally got going in mid-2011. 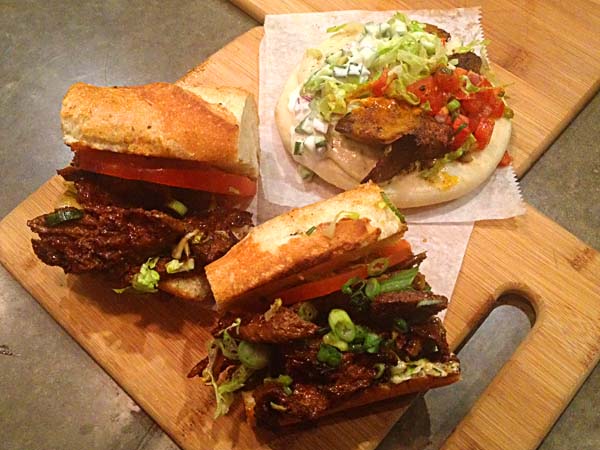 ARS: What role do you see the media playing in the animal rights movement?

VL: I think there are many roles the media is already playing. Most of them in the mainstream media are unfortunately about enforcing and reinforcing the status quo in terms of our food choices and our "dominant" relationship to "dumb animals." This has historically been the most common role as the members of the media are mostly stuck in what Melanie Joy calls a carnist mentality, unable to see outside the bubble of the fictions that keep the institution of animal oppression in place, and overly eager to be part of the same "club" as the reader. But that is changing. The existence of the film Blackfish, and CNN's choice to repeatedly schedule it on one of America's most-watched TV channels, has hit the "dumb animal" myth pretty hard and we're staring to see cracks there. I see a role for people like myself (one among many, perhaps) in promoting the buying and eating of vegan foods by everyone, vegan or not, since the more people encounter such foods and have positive experiences, the less they can buy into the "need" to stick with an animal-based diet, and the more vegan foods are purchased, the more of them will be developed and brought to market, crowding out (sooner or later) the animal-derived foods. But that doesn't account for every possible role - they're constantly shifting and new ones will continue to emerge.

ARS: While reporting for your column, how often have you come across a piece of information that was just shocking to you? What are some examples?

VL: Ha, I can't recall being "shocked" per se. There have been things that surprised me, for instance the Silk "New Milkman" ad was really surprising when I assumed it had actually been produced by Silk and shown on TV. Turns out it was submitted by an outsider (whom I tracked down and interviewed for the column) and though I don't think it's been on TV yet, it was for a long time the #1 video on Silk's own YouTube channel. I was pleasantly surprised in launching the Daily News Vegan Cheesesteak contest last year to find that at least 25 venues in town now had a plant-based cheesesteak on their menu. But most of the truly shocking info I've come across was stuff that made me originally go vegan back in the day, not stuff I've recently encountered in reporting the column.

ARS: This graph from Chronicle.nytlabs.com shows that the number of articles in the New York Times containing the word "vegan" has skyrocketed in recent years. It seems like this could apply to all media. What would you attribute this rise to? And how can we continue the momentum?

VL: I agree, there's another Google trends chart that shows a similar rise. Interest in "vegan" is certainly growing, and I think it will continue to, because what was holding the vegan concept back previously was a web of myths/lies/fairy tales that worked when information-sharing was difficult but were unsustainable in the long term. We're seeing those fall to the ground now, for instance, the "everybody knows" association of cow's milk with strong bones, as scientific facts accumulate that are becoming too hard to combat with relatively weak tools like shopworn mid-20th-century mythology. I may be a pollyanna, but I really think people are slowly waking up to, and getting ready to be able to handle, the truth.

Another factor, and a reason the momentum may not be without its speed bumps, is that Animal Agribusiness is recognizing veganism as a real threat and whereas before, their best strategy seemed to be to ignore it, now they're talking about it among themselves and trying to publicly argue with and discredit vegans, so that adds to the total mentions. But again, veganism has truth in its corner, so… bring it on!

In terms of media mentions, I should note that celebrity vegans (and "vegans") also play a role in this but in terms of benefit to our movement it's kind of a wash, as one backsliding "vegan" celeb undoes the positive image work of three solid vegan celebs, in my opinion.

ARS: Animal organizations love getting media coverage. Any tips on how to attract a reporter's eye? 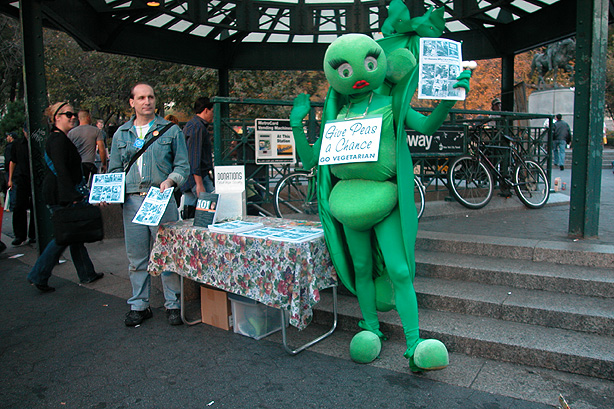 VL: Well, it depends on what you're doing, of course. Food businesses have the advantage that they can attract reporters through their most salient organ, the stomach. Street activists have to be visual and have a clear angle that a given reporter can understand. I always emphasize the visual, e.g. an animal costume, or Pamela Rice's PeneloPeaPod, because if a paper sends a photographer (which they often will if they expect odd, new, funky visuals) they'll likely use the photo even if they wind up not having room for a full story. And if you have signs with text, keep it simple and comprehensible not just for passersby but so you can strive to get those signs in the background of the fun-visual photo and therefore into the paper even if the story itself doesn't pan out. And of course I say "in the paper" but things that go into newsprint now go online and are seen by many more people, but it doesn't work the other way around. In other words, work for coverage from a mainstream news organization so that your coverage will get to the most potential outlets of whatever medium.

ARS: You are an ultra-talented and entertaining fella. From your famous Drawalongs, song writing, and performing at Vegetarian Summerfest to emcee'ing and writing, do you have a favorite way to perform? Is there something you've always wanted to do but haven't yet?

VL: Hey, I already agreed to answer these, you don't have to throw in the flattery! (But it is appreciated of course.)

I enjoy performing, and especially improvising, before an audience as a way of forcing myself to be in the moment, which is not all that easy in day-to-day living. For instance, when I do one of the "piano preludes" as people are taking their seats at Summerfest I'm almost always making most of it up as I go along (occasionally dipping into a melody I've already written, or, say, a piece of Gershwin's "Summertime"), which is something I can do at home, but knowing there are at least some people expecting it to be entertaining makes the moment much keener and more of a high-wire experience. 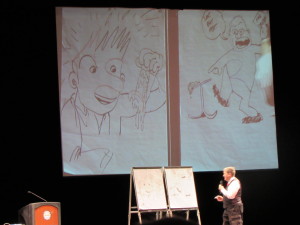 I would say the Drawalong is my favorite performing format. For those who haven't seen it I'm required to create a picture incorporating initials (letters) audience members have drawn on the big paper, and the picture must somehow illustrate a subject they have chosen. With, say, a whole day to study the letter forms and sketch different possibilities I could come up with something very representational and even conventional, and maybe even impressive, but the fun is having to do it right there in the moment, right away, in front of people. And it's actually very hard to think of a variety of ideas in that scenario, so a lot of time as soon as I come up with the most tenuous visual connection I will launch into drawing as though I have the whole thing planned out, but in fact I'm watching it evolve along with the audience, and of course, since the match is haphazard I have to distort things much more crazily than I do, or maybe am even able to do, in my normal sit-down-at-a-table-with-pen-and-ink cartooning. And the distortions require explanations, so I have to come up with verbal patter that strives to make "sense" of them. During these times I am truly in the moment, if only because there's no room for anything else.

VL: Right now my favorite dish - not quite big enough for a meal - is the Lángos at V Street Bar. This is the place recently opened by Rich Landau and Kate Jacoby of Vedge. Lángos is kind of a Hungarian pizza often topped with some form of soft dairy and sometimes bits of ham. This version is, of course, vegan, and the role of ham is played by tiny cubed beets. (Rich Landau is the only person who's ever made me love beets.) The "cheese" is infused with a good amount of dill, and the complementary flavors work together so well it's astonishing. Hey, maybe that's something I've been shocked by in reporting - how good this dish is. I've been to V Street a few times now and have not yet been able to leave without ordering the Lángos. As for entire meals, I've loved every meal I've had at Vedge, but I should also mention a new place in Jenkintown, just north of Philadelphia, called Flora, which does a pretty creditable prix-fixe meal that has its own style. The funny thing about Flora is that neither the owners nor the chef are vegan - they just saw a vegan restaurant as a good business opportunity, and so far they seem to have been right.

Oooh, sounds delicious! Vance, thank you for taking the time to talk with me. I look forward to seeing your next performance this year at Vegetarian Summerfest!